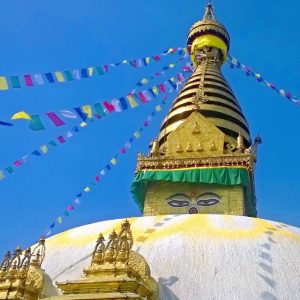 A weeklong festival aims to highlight and further promote the cultural essence of historic Swoyambhu has begun today. Swoyambhu is listed in the UNESCO world heritage site.

On the occasion, the mayor pledged to develop the site into one of major touristic destinations by connecting it with Hanumandhoka Durbar Square area through a trekking route. The distance between these two sites is some 2.2 kilometers.

A master plan to this regard had been already prepared and works are going on to materialise the plan, according to mayor Shakya who added that new plans aimed to lengthen the stay of tourists arriving Nepal would be brought.

Kathmandu metropolitan city office spokesperson Ishworman Dangol shared that some plans which include ‘service with smile’ and ‘to present gifts promoting Nepal’s introduction to visitors’ had come into effect. Federal Parliament member Jeevan Ram Shrestha said the KMC office was going with positive efforts for the protection of tangible and intangible heritages.

Inspector General of Police Sarbendra Khanal opined for celebrating the Visit Year 2020 at least for eight to ten years.

Underground electrification to kick off in Bharatpur soon

Saptakoshi Municipality-4 inundated due to collapse of Chandra Canal

Need of an integrated commission highlighted for inclusion promotion