China began its grand celebration to mark the 70th anniversary of the founding of the People’s Republic of China (PRC) on Tuesday morning in Beijing.

Chinese President Xi Jinping, also general secretary of the Communist Party of China (CPC) Central Committee and chairman of the Central Military Commission, and other Party and state leaders, stood on the Tienanmen Rostrum overlooking the packed square.

At 10:00, Chinese Premier Li Keqiang announced the beginning of the ceremony. 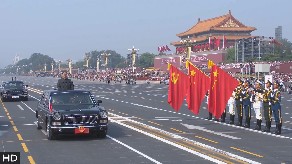 “The ceremony to mark the 70th anniversary of the founding of the PRC now begins,” announced Li.

While the flag was being hoisted, all those present at the ceremony scene sang loudly as a military band played the national anthem.

Xi then delivered an important speech at the ceremony.

“Chinese compatriots across the country, comrades, and friends, today we hold this grand gathering here to celebrate the 70th anniversary of the founding of the People’s Republic of China (PRC). At this very moment, with great joy, people of different ethnic groups around China and overseas Chinese are proud of our great motherland with sincere wishes,” he said.

A military parade and mass pageantry were held as part of celebrations.

The military parade showcased China’s achievements in building its national defense and armed forces in the past 70 years and reflected the outcomes of the reform of the people’s armed forces.