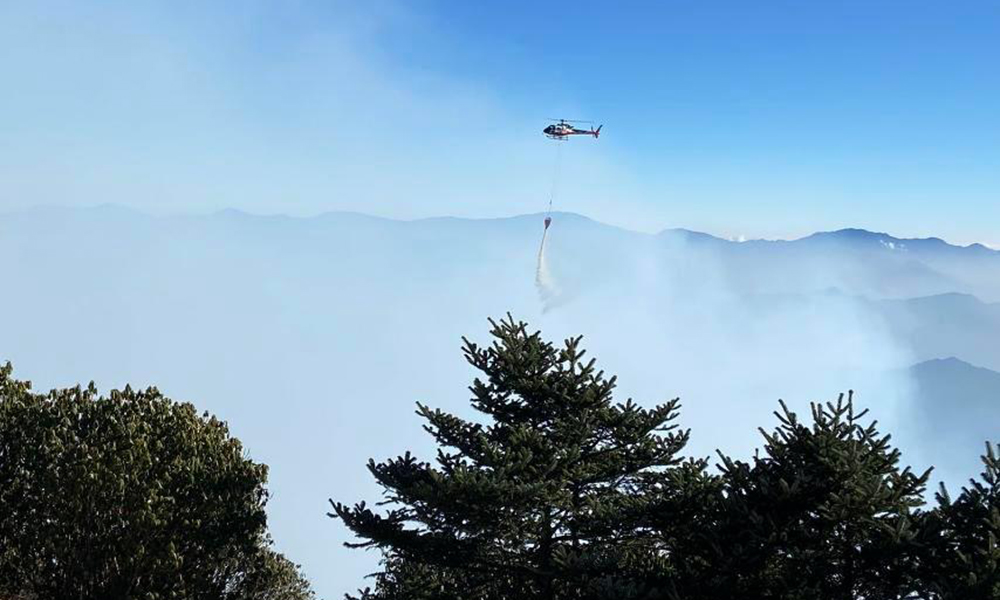 Taplejung-The fire in the jungle near Pathivara Temple here was prevented from reaching the temple on Monday. Even a helicopter was used to spray water to douse the fire that had been continuing for five days.

The team of the Nepal Army, Nepal Police, Armed Police Force, and locals failed to extinguish the wildfire which reached near the temple premises. So, a helicopter belonging to Simrik Air was brought to help put out the fire.

The helicopter fetched water from Jorpokhari to fight the fire, according to Executive Director at Pathivara Area Development Committee, Man Mani Kafle. A bucket of special technology contained the water in the chopper and sprayed it over the flame. Now, the shrine is safe, he added.

Although the wild flame is prevented in the temple area, it is yet to be put out in the jungle. A huge jungle is destroyed with it. Thousands of cow sheds were destroyed.

Now, the cowsheds at Harkate of Sirijungha Rural Municipality are still at risk. An endangered species of the wild animal-red panda- is found in the Pathivara jungle.

Pilot with Simrik Air, Surendra Poudel, shared that it was the first time the fire was doused by spilling water from the helicopter. “We had trained workforce which involved in fetching water and pouring over the wildfire,” he added.

The fire had begun five days back from Pathivara Simbu community forest of Phungling Municipality-12. It is not certain how the fire broke out.