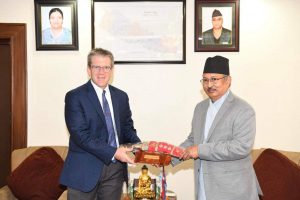 According to the Home Minister’s Secretariat, various matters of mutual interest were discussed during the meeting held at the Ministry.

Welcoming Ambassador Thompson to Nepal, Home Minister Khand expressed his gratitude for the US support to the development and democracy of Nepal and hoped for continued support in the future.

On the occasion, Ambassador Thompson expressed his belief that the upcoming elections in Nepal would contribute to making Nepal’s democracy more prosperous.