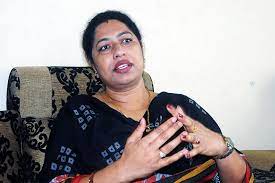 June 11, Kathmandu: Minister for Women, Children and Senior Citizens Chanda Chaudhary has called for working in unison among the government and stakeholders to secure the welfare of vulnerable groups such as women, children, senior citizens and people with disabilities.

Stating that COVID-19 had adversely impacted the economy and trade, Minister Chaudhary stressed on the need to launch skills-based livelihood programmes for women to link them with businesses and enterprises.

She said that the government should help such women find capital and market to start or resume their own enterprises.

In the virtual programme organized by the Confederation of the Nepalese Industries (CNI) on Thursday, the Minister stated that women, children, senior citizens and people with disabilities had been highly affected by the pandemic.

Similarly, UN Committee on the Elimination of Discrimination Against Women (CEDAW) member Bandana Rana shared that among those losing their employment during the COVID-19 pandemic, women constituted 70 per cent.