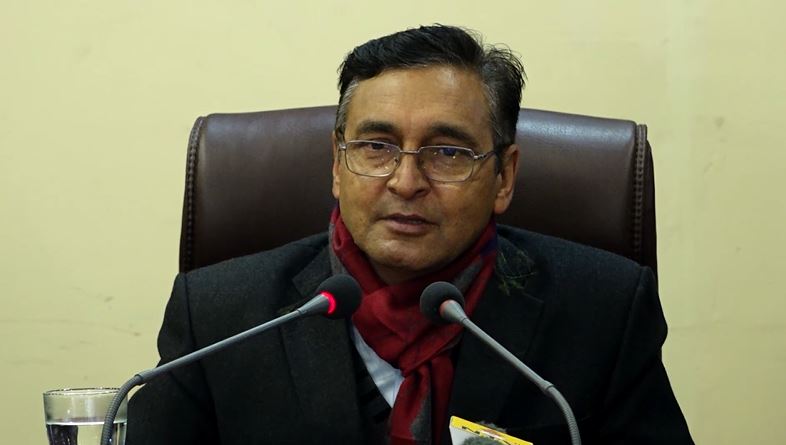 February 7, Pokhara: Minister Energy, Water Resources and Irrigation Top Bahadur Rayamajhi has asserted that the country could only achieve prosperity through the production of energy.
At the 20th annual general assembly organized by Nepal Solar Manufacturers Association in Pokhara on Saturday, Minister Rayamajhi said that Nepal had tremendous possibilities for power production and the surplus energy could be exported as well.

Rayamajhi insisted, “There is no alternative to moving ahead optimizing hydro energy and solar energy. We should generate electricity considering its export to neighboring countries India, China, and Bangladesh.”

He further opined that the industries should be run in the country that would increase the consumption of energy.

The Energy Minister shared that the government was working towards increasing the power production in the country in an expedited manner. A 99-point master plan had been devised and implemented to end the power outage spanning as long as 18 hours, according to him.

The Minister recalled how he had assumed his office as the Energy Ministry in the wake of the Gurkha Earthquake and blockade and how he got to shoulder the responsibilities of the same ministry amid the difficult circumstances.

Similarly, National Planning Commission’s member Dr. Krishna Prasad Oli stressed that Nepal should be made an organic nation for which he argued solar energy would be a very important factor.
Since solar energy has over 10 percent of contribution to the National Grid, Oli suggested that the entrepreneurs should involve in it in a planned way.

Secretary at Ministry of Energy, Water Resources and Irrigation Dinesh Ghimire shared that the implementation of 99-point white paper had ended load-shedding. He pledged to revise the white paper and bring it into effect more effectively.

Chief Executive Officer of Alternative Energy Promotion Center (AEPC) Madhusudan Adhikari said that the difficulties at the policy level have caused problems to work in the solar energy sector.