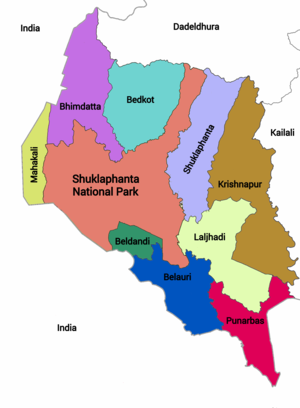 February 1, Kanchanpur: The District Returning Office Kanchanpur has stepped up its task of updating voters’ roll at all local levels here.

With the government announcement to conduct the mid-term polls in two phases in coming April and May, the district returning office has started correcting errors in the existing voters’ list, remove double-entry of voters’ names and update with the names of newly eligible voters.

Returning Office chief Udaya Raj Joshi shared that the voters’ roll update campaign has been put in place in all eight local levels of Kanchanpur since last Saturday. “The campaign would go up to coming Wednesday”, he said.
An arrangement has also been made to provide an opportunity to register complaints on the fake details of the voters enrolled in the list if any, he added.

The office has issued a public notice requesting the public to make corrections in their names and details inserted in the roll, remove the double-entry if any and also omit the names of those deceased from the list, and lodge complaints on the entry of any fake names and details of voters if any.

Kanchanpur having three electoral constituencies has a total of 277,059 voters.