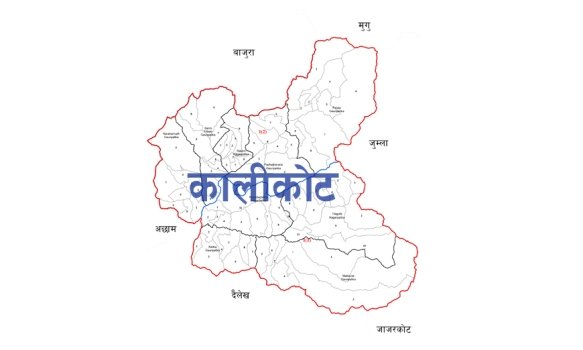 January 31, Manma: As many as 206 households at ward no 4, 5 and 7 of Naraharinath Rural Municipality in Kalikot district who were displaced by a massive flood on June 27 last year have been living under open sky braving the biting cold.

Altogether 16 people had lost their lives in the incident and thousands were displaced following the natural disaster.

A total of 1,128 people have been living under a tarpaulin sheet in the middle of a jungle and they are unable to eke out a living lately, informed Dhan Bahadur Batala, Chairperson of the Narharinath Rural Municipality-7 in the district.

Batala shared, “The chilling cold of winter has left children, women and elderly at risk of health problems.”

Dhansara Buda, a flood survivor, bemoaned, “We have been left at lurch and have been staying in a jungle following the flood. None has paid attention to resettling us to a safer place.”

However, surveyor at the District Survey Office Punam Bishwakarma shared that a preliminary study was conducted to find a safe and suitable area to resettle the flood-survivors. According to him, their village is at risk of flood. “Hence, resettlement is imperative.”

Biswakarma shared that it would take 83,520 square metre (9.3520 hectare) of land to resettle the flood survivors. A huge number of trees in the jungle ought to be cut down if they were to be resettled in the jungle. In consideration to that, the local authority is seeking an alternative to felling of trees in a large number.

Request for cooperation has been placed to the federal and province government for construction of shelters for resettlement, according to Manshova Buda, Vice-Chair of Narharinath Rural Municipality.

The local unit had provided relief packages to the flood survivors initially. The Sudurpaschim Province government has pledged to provide Rs 170 million for the construction of houses for the displaced ones but it is yet to be decided in the meeting of the Council of Ministers of the province government, informed Buda.