Elections are beauty of democracy, no need to run from it : PM Oli 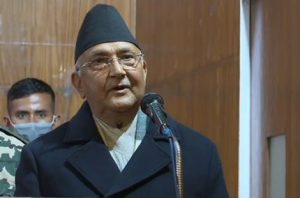 Kathmandu- PM KP Sharma Oli has urged all the political parties to get ready for the election, shunning all kind of street protests.

Addressing a gathering of cadres from Far Western Province in Kathmandu on Wednesday, PM Oli said as the election was the beauty of democracy, therefore no one should run away from it.

PM Oli also claimed that he was the chief of the party holding the majority in the House of Representatives and there was no condition for the formation of another government.  Thus, he dissolved the house and there was no possibility of reinstatement of the house.

He also expressed the Government of Nepal (GoN)’s commitment to holding a free and fair election as per the schedule.

Reiterating the commitment of the Nepal Communist Party to realizing the aspirations of Prosperous Nepal and Happy Nepali,

PM Oli said he would not accept any activities against the federal republic achieved through people’s struggles.

PM Oli said Puspa Kamal Dahal Prachanda became the chair of the party only because the new party was formed by unifying two parties. However, as Prachanda could not remain true to his commitment, and the party got split.

He also blamed the Prachanda-led group of wrangling for petty interests and trying to foil the GoN’s efforts for development using the majority in the ad hoc central committee formed for the unification of the party.

Also addressing the gather, Industry, Commerce and Supplies Minister Lekha Raj Bhatta said the GoN had no alternatives to election as the internal dispute in the party had crippled the GoN activities.