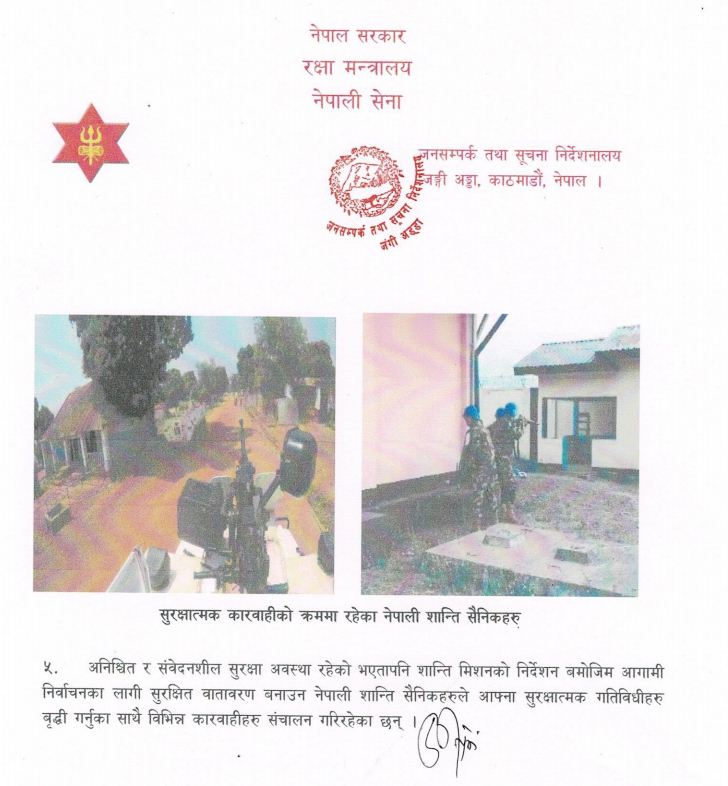 Kathmandu- The Nepali peacekeeping force has prevented Bambari, the main city of the Central African Republic, from being captured by the rebels.

A company of the Nepali peacekeeping force was mobilized in Bambari as a counter-move after it was seized by the rebels.

The rebels were forced to back out with the mobilization of the company, the Nepali Army’s Directorate of Public Relations and Information said.

It is said the government force there was successful in retaking control of the city with the support of the Nepali peacekeeping force stationed there.

The company was mobilized under the command of Commander of the Nepali Army’s Ranasher Battalion Lieutenant Colonel Minraj Tiwari.

The company had foiled the rebels’ attack on the camp of the government forces and the armed police in Bambari.

The Directorate informed that a large number of arms and ammunition including explosives were seized from the rebel forces following the recapture. All the Nepali peacekeepers mobilized in action are safe, the Nepali Army said.

The Central African Republic’s fourth-largest town, which was seized by rebel fighters on Tuesday ahead of next week’s elections, is now in the hands of United Nations peacekeepers and national security forces.

“The situation in Bambari is under control,” Abdoulaziz Fall, spokesman for the UN peacekeeping mission MINUSCA, told a press conference in the capital, Bangui, on Wednesday.

The attacks followed government accusations that ex-president Francois Bozize was plotting a coup.