EC gearing up for NA election 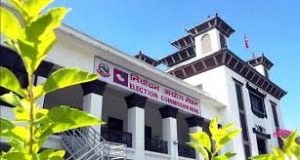 Kathmandu: The Election Commission is gearing up for the election of the post of the member of National Assembly scheduled for January 23, 2020. Accordingly, all preparations for the election are now being expedited, Joint-Secretary Raj Kumar Shrestha said. In this regard, the EC has completed orientation to the election officers for all the seven States. The office of the election officer will be established in the district concerned on December 31. Filing of nominations will be held on January 5. A total of 11 political parties have been registered to take part in the election. They have also been provided with election symbol. One-third of the post of the 59-member National Assembly comes to an end in every two years. Accordingly, the term of 19 members is coming to an end on coming March 3. Of them, 18 will be elected while one will be nominated by the President on the recommendation of the Council of Ministers. A total of 2,056 voters are eligible to vote in the election including 550 members of the seven state assemblies and 1,506 local level municipality mayor and deputy mayor, and rural municipality chair and vice-chairs. RSS